Body language, properly non-verbal communication, has become something of an obsession. I’ve written a number of posts about the supposed 55-38-7 rule and how it is often used out of context. A number of people have suggested that if I ‘shoot something down in flames’ (however false it is), I still need to suggest an alternative. Well the whole ‘body language’ thing is almost a cult, largely promoted by the evidence-less NLP (neuro-linguistic movement). I’m sure that no one would suggest I provide an alternative to a cult. I will anyway. Don’t join one.

So what are the alternatives to hours spent poring over body language books and attending expensive courses. They are surprisingly simple. Mostly body language devotees are concerned about deceit. Such as, how can I present myself as a genuine person?

There are tips to appearing genuine: (i) Relax; (ii) Be yourself; (iii) Don’t tell lies. 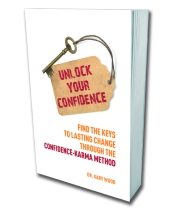 Relaxation is the basis of confidence. Invest time in relaxation and spend more time on activities where you feel comfortable in your own skin (that don’t involve drinking, talking drugs or binge eating). Body language often happens ‘naturally’. When we try to force it, we look phoney. Over analyzing our every non-verbal signal in minute detail can only have a paralyzing effect. All that happens is that we give out mixed signals which are more likely to be interpreted as deceit. These are all principle keys in my book Unlock your Confidence. I emphasize techniques that unlock our inherent abilities.

A lot of the obsession about body language is the need detect or hide deceit. Detecting deceit in not an easy thing. There are so many factors to take into account. Non-verbal communication needs to be interpreted in clusters. No individual signal is definitive. Context is everything. There is also so much rubbish written about non-verbal communication that we can never protect against someone else’s faulty interpretation. Non-verbal communication is about ‘broad strokes’. Many pop-psychology books just make things up that might look good in a press release and so picked up by newspapers and radio programmes that need to fill space with a bit of whimsy. So take the easier path, invest all that time that you would spend on studying body language on finding ways to relax and control your stress response. This in turn will make it more likely that you are comfortable in your own skin and are able to be yourself.

The original  Albert Mehrabian body language research was concerned with first impressions and also congruence between verbal and non-verbal signals. We have to bear in mind that the original experiments were laboratory based and so lacked a little real-world significance. As systems theorist Peter Checkland commented ‘Life is too quixotic to be modelled’. So, we need to take the non-verbal communications statistics with a dose of scientific scepticism. Unfortunately, self-help writers, television producers and magazine and newspaper editors simply don’t have the time, space or training to do this. Body language is often the favourite bit of ‘science’ to slot into analyses of reality TV. It’s a great lever to shoe-horn in a bit of cod-Freud.

Considering the role of body language in forming first impressions. Relaxation and being yourself are key. These are far more important than having to remember lots of manipulative bod language tricks that invariably look phoney. One important from the Mehrabian research is that we are all pretty good at working out when words and gestures are at odds with one another. The signals are meant to be taken as a whole to give us a general impression. That’s as often as much as we need. If you set about trying to find out if someone is truthful in an encounter, you’re behaviour may become so odd as your eyes flick here there and everywhere that the other person may interpret you as a liar. They in turn react to their perception of your deceit and become more guarded. You interpret this as their deceit because you have neglected to consider the effect your weird behaviour is having.

Confidence doesn’t come from having a set of party tricks and cod-psychology at your disposal, it comes from relaxing, being yourself and putting others at ease. If you get the impression that someone’s words and gestures do not match, then use more words to find out. Get more information. Ask questions.

If any body language ‘expert’ wants to prove the myth that words only count for only 7% of any communication I have a challenge.

Polish up on your open-gestures, upright, relaxed posture and perfect your smile, then next time you are on TV and get to say about 100 words, just work these seven words into the conversation and see exactly how much they count for. According to the myth, your words won’t matter, so let’s see.

Deep breath, relax, smile and repeat after me:

Keep smiling and  try it in church, at a job interview or to a police officer. Visit hospitals and old people’s homes. Work the words into a family member’s eulogy or at the bingo hall instead of ‘house’.

So your posture, gestures and lovely tone of voice got you through all of these situations without even the ‘batting of eyelid’ or the raise of an eyebrow? Thought not.

Now actually read the research and stop talking out of your ar$€ !

We have many taken-for-granted assumptions about the biology of men and women. So, I offer this, provocative, human anatomy quiz. It’s aimed at unpacking the assumptions we make when telling stories around sex and gender.

For a fuller discussion of sex and gender see my book The Psychology of Gender (For US click, For UK click ). In the meantime, here are the answers:

The Psychology of Gender looks at our biology, history and culture to consider the impact of gender roles and stereotypes, and addresses the ‘dilemmas’ we have regarding gender in a post-modern world. (For US click, For UK click ).

So where does this take us?

Well, in the direction of a twelve point personal research plan to check out the answers and then consider how these facts impact on our social interpretation of biological sex, that is our gender roles (and our attitudes to sexuality).

[Material adapted from Sex, Lies and Stereotypes, by Gary Wood]